Volts & Moustaches is a split screen local multiplayer game. (Two players and two XBOX controllers needed). The Goal of this game is to defeat the opposing player collecting voltaic energy by capturing towers, or destroying his main capacitor by linking towers from your own main capacitor to his. While in your power, each captured tower gives you voltaic energy (VE) over time. The first player to reach X VE wins. How to play: The players start the game on their main capacitor. They wear an energy backpack which they use to capture towers or shoot the rival. There are many towers in the playfield. Players need to turn them on first using the tower’s crank handle (X) in order to power them up (B) using the energy stored in their backpacks. Shooting (RT) and powering up (B) towers consume the energy stored in the backpack. You can recharge the backpack standing next to a owned tower. 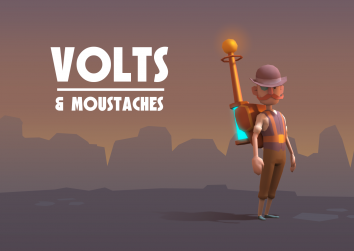 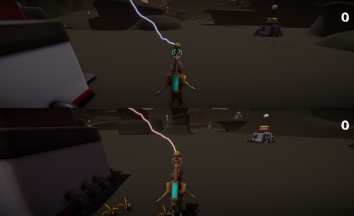